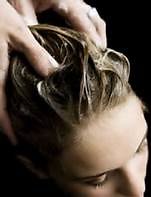 
What is Dandruff?
A common flaking of the scalp also known as Pityriasis Simplex. The condition is so widespread most people at some stage may experience the problem. Dandruff rarely affects people before adolescence due to the lack of oil secretions.

What does it look like?
Dry, scaly condition usually affecting the entire scalp. The small white flakes may be scattered over the over the hair and shoulders by scratching, brushing or combing.

What causes it?
It is often difficult to determine the onset of dandruff because there is a natural flaking of the scalp, so an increase in scaling might go un-noticed for a period. Generally, the cause is a combination of an increase in the shedding of skin cells, oil production and the presence of microorganisms.It can also be triggered by an allergic reaction to a rise in normal scalp flakes.

What are the signs and symptoms dandruff?
Begins as a simple, dry scaly scalp condition. Fine flakes may appear across the entire scalp.In more severe cases the flaking increases, accumulating flakes causes the flow of oil to become blocked. This may affect the condition of the hair.If the condition is neglected, the hair can become dry, brittle or even become split and unruly.

Treatments for Dandruff see products
Even severe dandruff responds well to a regular course of treatment. Because there is more than one cause to the onset of dandruff, the success of treatment depends on the removal of all possible causes. Removal of present flakes and inhibit the formation of further flakes is the first stage.Initially by an increase in the number of weekly washes using a specific shampoo. A weekly pre wash scalp application may also be required to remove stubborn flakes.

If an allergic response is the cause then regular control is important, but in this case elimination is difficult.

The best way to keep control of the problem is with a regime suited to you. Contact the clinic for a consultation and scalp care regime. 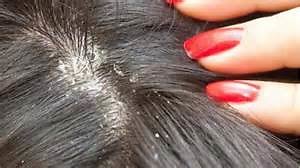 What is Seborrhoeic Dermatitis / Eczema?
The words dermatitis and eczema refer to the same condition.
The term dermatitis denotes an inflammation of the skin, seborrhoeic refers to the fact the condition appears in areas rich in sebaceous (oil) glands such as the nasal folds, forehead, and scalp.

Seborrhoeic dermatitis is probably the most common scalp condition seen in my Clinical practice, it can affect as many as 3% of people. It seems to be more common in men than women.
Infants can develop it; but then it usually clears up after a few months. It is common in young adults, peaks at the age of forty, and is less common in old age.

What causes it?
Seborrhoeic dermatitis can be controlled with treatments that attack the yeasts that live on the surface of everyone’s skin Molassezia fur fur-also known as Pityrosporum ovule. This suggests that these skin yeasts play a part in causing it. This yeast germ lives in the sebum (oil) of human skin in most adults. For the majority of people it does no harm. However, some people seem to 'react' to this germ in some way, which causes inflammation. Androgen (male hormone) production stimulates sebum secretions the yeasts like to live in sebum, sweat, and skin scales, causing it to proliferate. Seborrhoeic dermatitis is not passed from person to person. Nervous tension or anxiety can cause androgen over production, and excessive perspiration, which can also affect it.

What are the signs and symptoms of seborrhoeic dermatitis?
Dullish red moist scalp, underlying erythematic (reddening of the skin) the redness of the rash can be embarrassing when it comes out on the face. The red areas are covered with greasy looking white or yellowish scales. Most commonly, the rash comes up on just on one or two areas, but it can sometimes be extensive. The scalp can produce embarrassing scaling (dandruff like flakes). Moderate to severe itching - can be itchy or sore.

Areas most commonly affected:
The scalp: ranges from a mild dandruff to a severe red scaly weepy and sometimes oozy rash, which can extend out onto nearby parts of the forehead and around the ears. Cradle cap in infants may be part of a seborrhoeic dermatitis.
The face: The creases beside the nose and adjacent parts of the cheeks. It often affects the inner parts of the eyebrows, and the eyelids may be red and irritable. In and around the ears: some people have inflammation inside the ear canal, inside and behind the ears, on the front of the chest, between the shoulder blades armpits and groin: it often affects areas that are prone to sweating and retained moisture such as the skin under the arms and breasts, in the groin.

What is the treatment?
There is no cure. However, it can be controlled with possible long-term remissions. Treatment can suppress the condition rather than cure it, and that it often returns after treatment has stopped. You may therefore have to use treatments for months or even years. For this reason, they must be safe in the long term. The choice of treatment also depends on which parts of the skin have the rash:

In the scalp: For mild scaling, treatment shampoos can be used regularly or a regime designed for the person.

A scalp application of a pre-wash treatment cream is often needed. Sometimes an application containing a mild steroid can help reduce itching and redness but is not recommended for long-term use.

Diet and lifestyle may also be a contributing factor. Advice on this can be obtained from the Trichologist.

What is Atopic eczema?
Atopic eczema is an inflammation of the skin, which produces redness and itching. The whole body can be affected. It affects both sexes equally and can start in the first few weeks or months of life. It is common in children, although many adults suffer the condition. People who suffer from atopic eczema are more likely to have asthma and/or hay fever and vice-versa.

What causes it?
Many things can make eczema worse. Some of the main ones are:

Contact reactions such as Irritation from soaps, perfume, and preservatives. Dry skin,

Food reactions -the most common reactive foods are thought to be wheat and diary products particularly those containing milk and alcohol.

What does it look like?
It begins with red and dry skin. When the eczema is very active (during a flare-up’), the skin may swell, and develop small water blisters; followed by weeping. If scratched, these will break, leaving your skin wet and weepy, crusting and dry flaking usually follows. In areas that are repeatedly scratched, the skin may thicken in response. This is often termed the ‘itch-scratch’ syndrome.

Areas most commonly affected: The face especially above the eyes, around the neck, into the scalp and even ears, arms especially elbows and wrists, legs especially knees.

Does it run in families?
Yes - atopic eczema, also asthma and hay fever sufferers tend to have a genetic predisposition. I.e. if one or both parents suffer from eczema, asthma, or hay fever, it is more likely that their children will suffer from them too.

What can make eczema worse?
Many people with atopic eczema have allergies as well. The most common one is to the house dust mite. Decreasing the amount of house dust and its mites, may help to control eczema. Similar allergies can occur with pollen and animal fur.

What is the treatment for the scalp?
Atopic eczema cannot be cured, but there are many ways of controlling it. Try to avoid using soaps and detergents that may aggravate the scalp. Treatments used most often are moisturisers and topical steroid creams / ointments.

A regime can be applied to help. A consultation to discuss individual need is advised.

What is Psoriasis?
Psoriasis is a skin disorder that can be recognised by Plaques often circular - deep red, brown, purple, clearly different from surrounding skin. Sometimes completely covered with silver / white scales. The condition appears on scalp and can appear on the body knees, and elbows.

Associated signs - thimble pitting on nails can be accompanied by painful, stiff and swollen joints. It can affect about 2% of people. It has a tendency to run in families. Manifestation can develop at any age but it most commonly starts between the ages of 15 and 25.

What causes it?
The exact cause is not known. Normal skin is made up of layers of skin cells. The top layer of cells are gradually shed (they fall off). New cells are constantly being made underneath to replace the shed top layer. It normally takes about 28 days for a bottom cell to reach the top and to be shed. This is termed as the Mitotic rate.

People with psoriasis have a faster turnover of skin cells, this rate is increased by as much as five times. As more skin cells are made this ultimaly leads to a build up of cells on the top layer. These form the 'flaky plaques' on the skin or severe scaling on the scalp .There is also a slight change of the blood supply of the skin. This tends to cause some inflammation in the skin and why the skin underneath a patch of psoriasis is usually red.

Aggravating factors
There is no apparent reason why most flare-ups of psoriasis develop. However, in some cases psoriasis is more likely to flare up in certain situations. These include the following:

The Maylan Centre
62A High Street
Rochester
Kent
ME1 1JY

Online consultations
As the current situation escalates with the ever likely prospect of self-isolation, social distancing and concerns about ‘unnecessary journeys’ it has been decided to allow online consultations so you can still access help with your hair loss & scalp problems.

An ‘On-line Consultation’ platform has been introduced at the clinic to enable a consultation with you face to face via web-cam.
Usually, in clinic consultations are conducted including a detailed case history with a thorough scalp examination, this may include samples for microscopic examination. Once all the information and examination is completed a preliminary or confirmed diagnosis can be made for the problem.

Treatment for the problem can then be discussed or further tests may be needed to confirm or complete the diagnosis such as blood analysis. Follow up and further advice may be needed.

Using the online consultation system, the process will differ to some extent. Although the detailed case history can be taken, a thorough scalp examination will not be performed and only general observations can be made. This means more of a preliminary diagnosis will be given subject to and an ‘in clinic’ follow up required with a more physical hair and scalp exam at a later stage. You may also be asked to perform hair collection tests and assessment of certain blood levels where necessary.

Follow up letters will state that this was a remote consultation due to the current situation form the Coronavirus crisis.